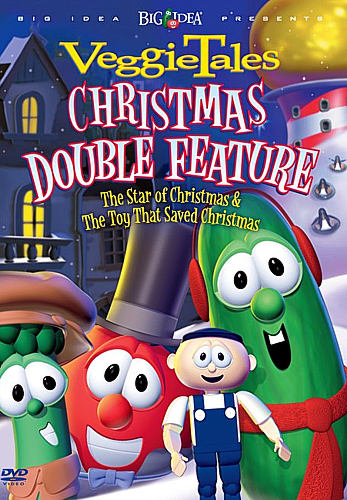 * The Toy That Saved Christmas *

A VeggieTales Christmas classic which presents the true meaning of Christmas.

Grandpa George tells a story about Wally P. Nezzer, the owner of a toy company, who is spreading theword via a television commercial that the meaning of Christmas is to get more and more toys. After seeing this, the Dinkletown kids were whining about wanting more toys. He explains to his assistant (Mr Lunt) that this is a strategy to create demand for his toys in order to boost sales. The toy in question is called Buzz-Saw Louie, the only toy featuring an actual working buzz-saw built into his right arm. * The Star of Christmas * A hilarious, action-packed Christmas story adventure that encourages us to love each other. And more importantly, teaches us that God showed the greatest love of all when Jesus was born.

Cavis Appythart and Millward Phelps (Bob and Larry) are putting the finishing touches on their first Christmas musical. With more electric lights than London has ever seen, Cavis is sure his show will teach London how to love. Unfortunately, the local church's Christmas pageant is scheduled forthe same night. Which will London turn out to see? Find out in this Christmas story adventure that encourages us to love each other.