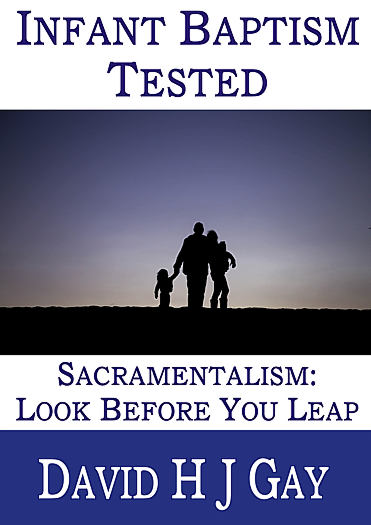 This book will not appeal to every Christian. It is, after all, a polemical work, designed to explore infant baptism and expose it as destructive of the gospel. And it raises important questions: What is a Christian? How does one become a Christian? What is a church? How does one become a member? And, above all, what of the eternal consequences of baby-sprinkling in the name of Christ? Some believers don't like controversy, full stop. So they won’t like this book. Some will deplore its appearance, thinking it divisive in an age of ‘togetherness’. Others will consider it a sterile work, opening old wounds, fighting worn-out battles of an age long since gone. David Gay disagrees.

The issue is not dead. Sacramentalism is on the rise in Reformed circles, and elsewhere. Calvin’s (and Augustine’s) views on infant baptism (and the Lord’s supper) are increasingly being turned to. Attitudes to children, and ways of treating them spiritually, are being radically changed on such a basis. And Gay, deploring this, wishes to warn those who are thinking of adopting the Reformer’s teaching on infant baptism. Some Baptists, who rightly take the Reformed view of salvation, beguiled by the names of the ‘big guns’ who baptise infants, are attracted by the seeming logic of ‘covenant theology’.

‘Look before you leap’, is Gay’s theme.

To help such readers take a good look before they leap, and to challenge those who already baptise infants, he has produced this book - which does what it says in the title: ‘Infant Baptism Tested’. So, reader, if you think it right to contend earnestly for the faith, and if, with an open Bible, you are prepared to examine infant baptism, and willing to test its practice, and thus come to an informed decision about it, this book is for you. If, after reading it, you don't agree with the author, at least you will have thought it all out. But you never know - you might find the seeming heavy-weight arguments put forward by infant baptisers don’t stand scriptural scrutiny, that covenant theology is not biblical after all, and that sacramentalism is an abomination. Are you willing to take that risk?