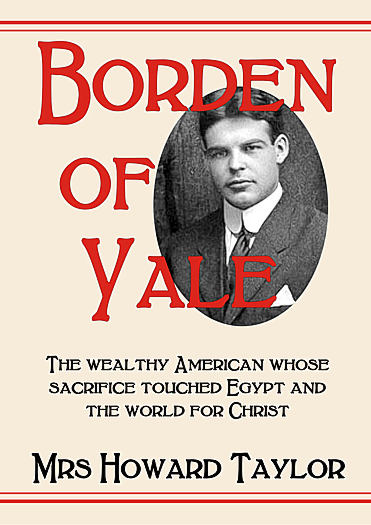 Borden of Yale by Mrs Howard Taylor and published by Classics.

Born into a wealthy American family, William Borden attended Princeton Seminary and graduated from Yale. Despite an upper class upbringing, his travels around the world challenged him to the needs of the heathen world for Jesus Christ, and he purposed to make his choices count toward that goal. As Borden trained for a life of service to the Kansu people of China, his heart and labour went out in very practical ways to the widows, orphans and cripples in the back streets of Chicago. A quiet yet powerful man, he diligently sought to win other young college men for Christ and His service.

His arrival in Egypt in 1913 was tragically marked by his contracting cerebral meningitis. His untimely death at the age of 25 was covered by nearly every newspaper in the United States as a testimony for Christ. Though “a waste” in the world’s terms, both his life and his death have been a testimony and a challenge even beyond his own generation to “keep eternity's values in view.”gives new meaning to Christian service!