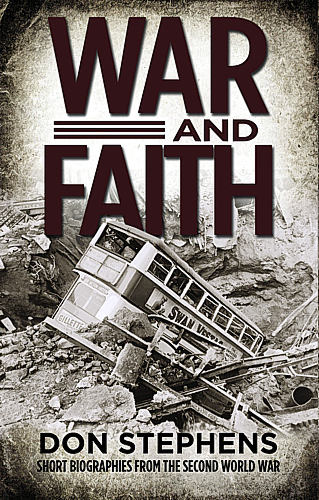 War and Faith by Don Stephens and published by Evangelical Press.

The Second World War was the most destructive conflict in human history. More than forty million people died and millions more suffered all kinds of loss.?This sequel to the author’s best-selling War and Grace tells the stories of eight people and their experiences before, during, and in the years following World War II. Several of them were caught up in the cruel persecution of the Jewish people by the Nazis. Others were involved in the fight to defeat the evil ideology which led to such atrocities. All of these people came to faith in Christ, and from then on their faith was the driving force behind their lives.

Don Stephens has collected moving stories from the Second World War that will enthral and move his readers. As Brigadier Ian Dobbie, OBE says in the Foreword, Don “has the gift of telling a story in a way which grips the reader, and yet he is not guilty of writing in a sensational manner, nor does he fail to remind his reader that war is always a terrible event, and that the God of the Bible remains sovereign.”

The stories range from the South African Air Force war hero who became a vital missionary pilot, to the Scottish lady from quiet Dumfriesshire who was a martyr at Auschwitz, to the German Prisoner of War who found a strong spiritual link with the Wirral. The eight stories combine to remind readers dramatically that our God is able to use even the dire circumstances for his glory

The Fall of Lucifer, Chronicles of Brothers Series