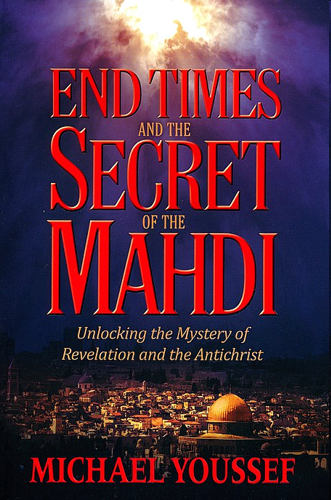 End Times and the Secret of the Mahdi: Unlocking the Mystery of Revelation and the Antichrist by Michael Youssef and published by Worthy Publishing.

The emergence of Radical Islamists should be no surprise to students of Scripture. America is only now understanding their intense passion to rule, not only the Middle East, but the western world as well. Youssef points to passages that show us how biblical prophecy speaks to the awful things to come. Beware of the secret of the Mahdi!

Here in this book the author demonstrates the parallels which exist between the “Beast” of Revelation (the Antichrist) and the prophetic figure in Islam known as the Mahdi. Muslims view the Mahdi as a great savior who will lead a revolution and establish a global Islamic empire over the West. Both the Antichrist and the Mahdi are associated with the end times and the Judgment. Both possess political, military, and religious power, and both head up a one-world religion. How this affects Americans today is revealed in Youssef’s prophetic The Secret of the Mahdi.

Then and Now Bible Maps