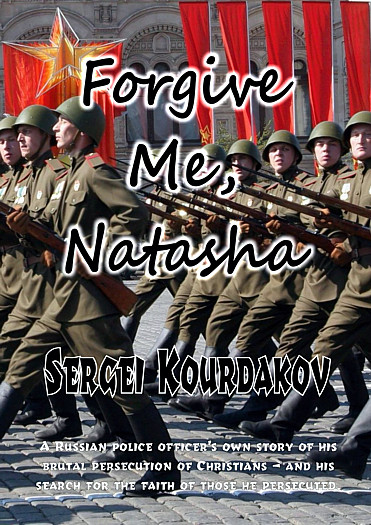 Forgive Me, Natasha by Sergei Kordakov and published by Classics.

As the teenage head of a Soviet police squad, Sergei Kourdakov led vicious attacks on Christian believers - until the courage of a girl he had beaten led him to defect to the West in search of the Christians' God.

Sergei died, aged 21 in mysterious circumstances, but the book he left behind is a moving testimony to the power of God to change a life. It is also a unique and graphic account of childhood in a Soviet orphanage; and of a youth, moulded by Communism, the system which shaped his ideals, but which finally destroyed his illusion.

To the young lady that caused him to begin his search for the true God he writes at the end of this book...

"Natasha, whom I beat terribly and was willing to be beaten a third time for her faith, I want to say, Natasha, largely because of you, my life is now changed and I am a fellow Believer in Christ with you. I have a new life before me. God has forgiven me; I hope you can also. Thank you, Natasha, wherever you are. I will never, never forget you!"