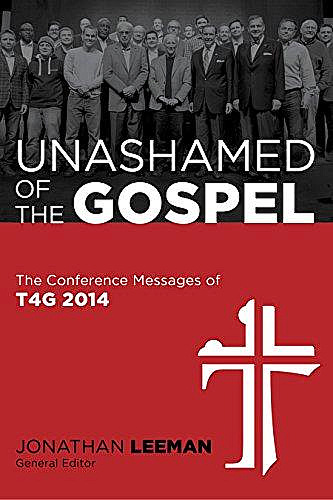 Unashamed of the Gospel, The Conference Messages of the T4G 2014 edited by Jonathan Leeman and published by Broadman & Holman Publishing.

The earliest Christians had the privilege of bearing the name of Jesus Christ to enemies of the gospel. They were residents of the Roman Republic, but also citizens of heaven. They were persecuted for their faith, but were unashamed of the gospel. They knew him whom they believed and were persuaded he was able to deliver them from evil. Fast-forward twenty centuries. Spiritual temperatures are again dropping. These citizens of heaven are now resident throughout the world, and are being granted the privilege of the early saints.

As nations grow ever more hostile to Christ and his followers, Jesus summons those who bear his name to be unashamed. He is the only hope of salvation for all who repent and believe. In Unashamed of the Gospel, authors Matt Chandler, R. Albert Mohler Jr., John MacArthur, Thabiti Anyabwile, Mark Dever, Kevin DeYoung, J. Ligon Duncan III, John Piper, and David Platt come together for the gospel to encourage Christians with Paul s pastoral plea to Timothy: do not be ashamed about the testimony of our Lord (2 Timothy 1:8).