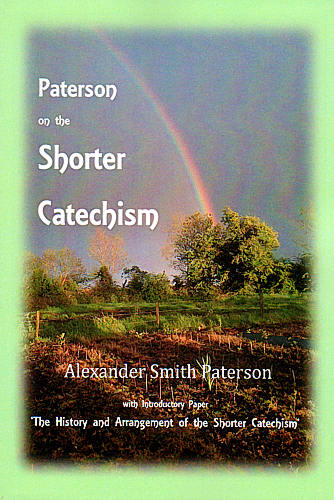 Paterson on the Shorter Catechism by Alexander Smith Paterson and published by Prints Old & New.

This volume has been described as "... being one of the most beautiful, complete, and accurate expositions of the Short Catechism which has ever appeared - unfolding the meaning of the answers to each question with a clearness and minuteness of detail hitherto unequalled in works of this kind."

On the Westminster Shorter Catechism: “While the Confession of Faith was under discussion in the Assembly, committees were appointed to reduce it into the form of catechisms, one Larger, for the service of a public exposition in the pulpit, according to the custom of foreign churches; the other Smaller, for the instruction of families.” Belfrage’s ‘Shorter Catechism’

Church of Scotland - Assembly at Edinburgh, July 28, 1648. Sess. 19. Act approving the Shorter Catechism. “The General Assembly having seriously considered the Shorter Catechism agreed upon by the Assembly of Divines sitting at Westminster, with assistance of Commissioners from this Kirk; do find, upon due examination thereof, that the said Catechism is agreeable to the word of God, and in nothing contrary to the received doctrine, worship, discipline and government of this Kirk: And therefore approve the said Shorter Catechism, as a part of the intended uniformity, to be a Directory for catechising such as are of weaker capacity." A. Ker