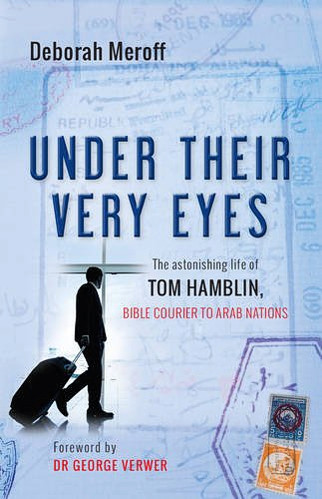 Under Their Very Eyes, The Astonishing Life of Tom Hamblin, Bible Courier to Arab Nations by

From a brutal and impoverished background in Reading, England, Tom Hamblin became a believer as a teenager before serving as a missionary in the Far East. He and his wife Edna spent more than a decade leading expeditions into the heart of Borneo. Gradually they become convinced that the Lord was calling them to minister in the Arabic peninsula: in particular, to carry in thousands of Bibles in Arabic, Farsi and Urdu. They conveyed shipment after shipment into this region, never losing a copy and surmounting all restrictions. Customs guards turned a blind eye.

Tom distributed Bibles very simply: walking around with a bag and waiting for people to ask him what he was doing. The Islamic world is widely regarded as closed to the gospel, but this is untrue. Tom discovered an extensive network of believers - very few churches, but many clandestine meetings for worship - and a huge hunger for the Truth. Under Their Very Eyes is the remarkable biography of a Bible smuggler to the Arab world that will stir the reader's spirit.

A Wind In The House Of Islam

Secret Believers: What Happens When Muslims Turn to Christ?