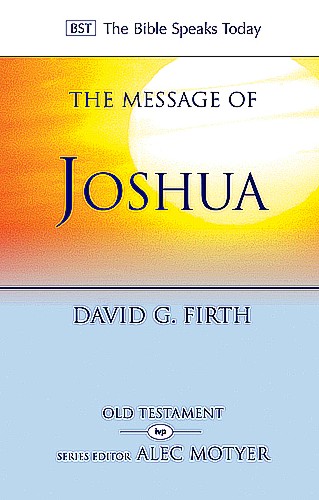 Message of Joshua - BST, Promise and a People by David Firth and published by IVP Books.

The book of Joshua recounts the events of Israel's entry into Canaan, the promised land: Joshua's commission and reassurance, crossing the Jordan river, the capture of Jericho and Ai, the grand covenant renewal ceremony at Mount Ebal, the curious treaty with the Gibeonites, and a rapid overview of the campaigns in the south and the north. The second half of the book gives extensive details of the allotment of the land to each tribe, before resuming the conquest story and concluding with farewell speeches and burial notices.

It is an action-packed story - but perhaps more than any other, Joshua is the OT book that most troubles contemporary readers: Isn't there too much violence, and isn't this inconsistent with the rest of Scripture, and the gospel?

David Firth begins his exposition with a careful and helpful response to this issue. Firth's basic contention is that we have to read Joshua as part of God's mission, which for much of the Old Testament centred on Israel, but which finds its ultimate focus in Jesus Christ. The book challenges those who have read it down through the ages to recognize that God not only includes those who join him in his mission, he also excludes those who choose to set themselves against it.

Men: Firing Through all of Life

Signposts - Devotional Map to the Psalms

Ambassadors to the World