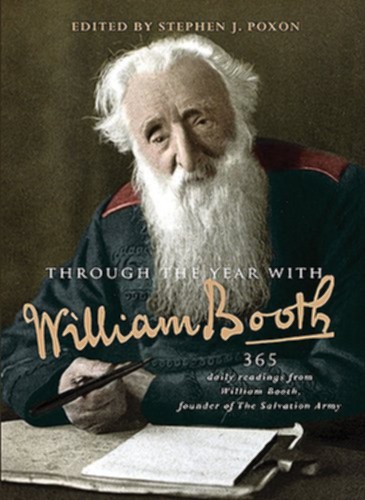 Through the Year with William Booth 365 daily readings from William Booth, founder of The Salvation Army by Stephen J. Poxon and published by Monarch Books.

William Booth – pawnbroker’s assistant, firebrand preacher, advocate of women’s rights, friend of the poor, confidant of statesmen, politicians and royalty, father of eight children, champion of the marginalised, and founder and first General of The Salvation Army. General Booth’s courage, oratory and passion changed Victorian Britain. He resolutely ignored his critics – including those who decried him as the Anti-Christ – and reached out to those who considered themselves well outside the concern of Almighty God.

Prayer and practicality were his hallmarks: he ridiculed the idea of preaching to a beggar while that beggar was cold and hungry. William Booth worked tirelessly, campaigning, researching, negotiating, adapting music-hall songs – and writing. This book introduces us to his heart and convictions. Here we find the urgency, thought and humanity which drove him on.

Hope for the Journey Through Cancer **

What Women Don't Know (And Men Don't Tell You)