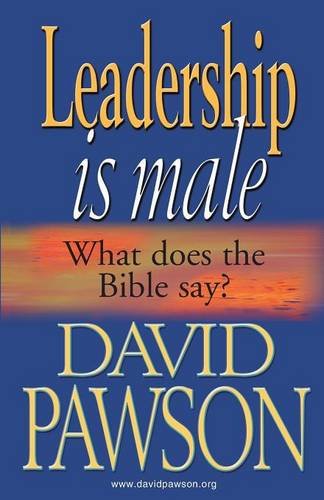 Leadership is Male, What Does the Bible Say? by David Pawson and published by Anchor Recording Limited.

David Pawson writes: "Many will see this book as an anachronism, hopelessly out of date and the dying echo of a controversy that has virtually been settled. So, why stick my neck out with this re-publication of a book that first appeared in 1988? The situation may have changed, both inside and outside the church in the last two decades. But two things have not changed. God’s Word, expressed in Scripture, has not, nor has love for Him, expressed in obedience. We are not called to be credible to contemporary society, but rather, model a counted-culture of a truly healthy, holy and happy society in a world that has lost its bearings.

This is not a treatise on marriage or the ministry of women (though there are implications for both), it is addressed solely to the question of leadership in the redeemed people of God, which I am thus far convinced must be male." David Pawson gives, what he calls, two major positive applications, one for women and one for men.

Come With Me Through Jude

Come With Me Through Isaiah

Come with Me Through the Gospel of John

Fasting: The Key to Releasing God's Power in Your Life