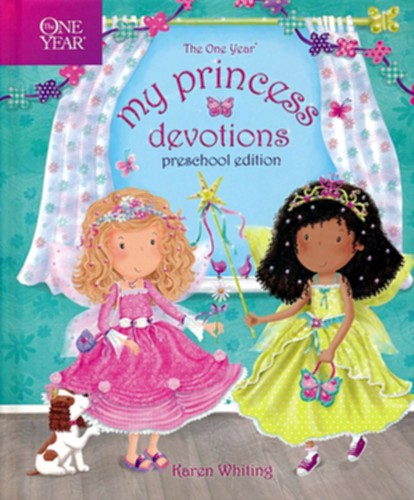 The One Year My Princess Devotions for Preschoolers by Karen Whiting and published by Tyndale House Publishers.

Princesses are a big attraction for most girls, especially preschoolers and early readers. The One Year My Princess Devotions is written for early readers and preschoolers. Each devotion sheds light on how the reader is a princess—a daughter of God, the King. The devotions also emphasize how little princesses should respond to being God’s children. Each devotion includes Royal Words (the Bible verse), Princess Thoughts (a short devotion written for early readers), a Prayer, and a Princess in Action section (an activity related to the devotion).

The devotions are thematic according to the calendar. For example, January features creation and February highlights love. Little Princesses will look forward to learning more about their King each day.