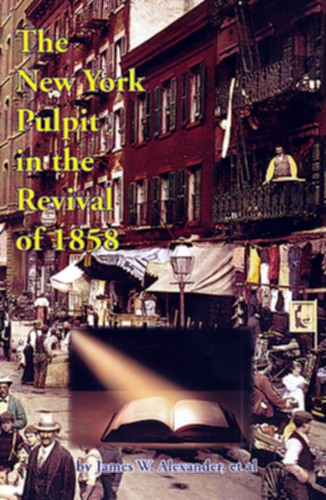 The New York Pulpit in the Revival of 1858 by James W Alexander et al and published by Classics.

The great Revival of 1858 will be memorable in the history of the Church of God. In the features of its commencement and its progress it has been so manifestly marked by the power of the Holy Spirit, that men with one accord are willing to give God the glory of the work.

In the city of New York and in its vicinity it has been in many respects more remarkably developed than in any other part of the country. Here emphatically it has been "Not by might, nor by power, but by the Spirit." It has been characterized by united, fervent, and importunate prayer. God has appeared for the salvation of sinners, and multitudes have been converted to Christ. The revival has been confined to no part of the city, and to no section of the Church. Christians of various names have cordially united in the work, and God has blessed them all with the outpouring of his Spirit. The measures employed have been the ordinary and appointed means of grace - the preaching of the word, and prayer.