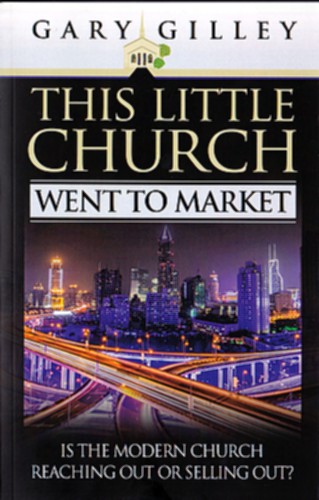 This Little Church Went to Market: Is the Modern Church Reaching Out or Selling Out by Gary Gilley and published by Evangelical Press.

With the spectacular successes of mega churches like Saddleback Community Church in Lake Forest, California, churches all over the world are buying into the market-driven philosophy of church growth and expansion. But what price have these churches paid in order to fill their pews with scores of people? Is the market- driven phenomenon comparable to such historic movements as the Evangelical Revival? Or has the church lost its culture wars?

Gilley contends that the church has indeed lost the war, so much so that the influences of culture have become influences in the church. As such, the most significant forces pressing against the church are entertainment, market-driven philosophies and psychology. These three are largely absent from the Bible, yet are startlingly prevalent in evangelical churches. While Gilley’s main focus is on the American phenomenon, it is equally true of churches all over the world.

Since it was first published, this book has been fully updated and revised with additional material. This a serious and timely call for churches to return to their scriptural roots ... before it is too late!

Angels on the Night Shift

A Place of Healing

Daily Readings from the Life of Christ - Volume 1 **