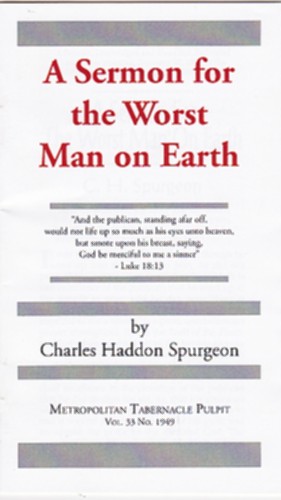 A Sermon for the Worst Man on Earth (Classic Booklet) CBS by C H Spurgeon and published by Classics.

Based on Luke 18:13 Spurgeon writes "It was the fault of the Pharisee that though he went up into the Temple to pray, he did not pray. There is no prayer in all that he said. It is one excellence of the publican that he went up to the Temple to pray and he did pray—there is nothing but prayer in all that he said. “God be merciful to me a sinner” is a pure, unadulterated prayer throughout!

It was the fault of the Pharisee that when he went up to the Temple to pray, he forgot an essential part of prayer which is confession of sin—he spoke as if he had no sins to confess, but many virtues to parade. It was a chief excellence in the devotion of the publican that he did confess his sin, yes, that his utterance was full of confession of sin! From beginning to end it was an acknowledgement of his guilt and an appeal for Grace to the merciful God. The prayer of the publican is admirable for its fullness of meaning. An expositor calls it a holy telegram—and certainly it is so compact and so condensed, so free from superfluous words—that it is worthy to be called by that name. I do not see how he could have expressed his meaning more fully or more briefly. In the original Greek the words are even fewer than in the English."

Secret Thoughts of an Unlikely Convert

John Knox and the Reformation