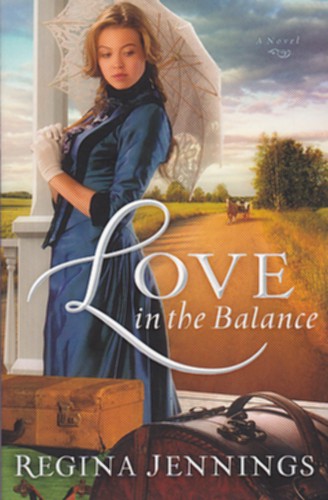 Love in the Balance ** by Regina Jennings and published by Bethany Press.

Molly Lovelace dreams of being a society leader in 1878 Lockhart, Texas, but being smitten with handsome wrangler Bailey Garner doesn't seem the quickest route. If only he would settle down so he could support a family.

Bailey imagines doing great things for God, but his biggest issue is Molly. As long as he thought they'd be married, he excused their stolen kisses, but when she keeps refusing, he vows to earn her love. In town, he tries his hand at several different trades, but everywhere he turns he runs into the mysterious stranger Edward Pierrepont. No surprise that Molly's always making calf eyes at the wealthy adventurer.