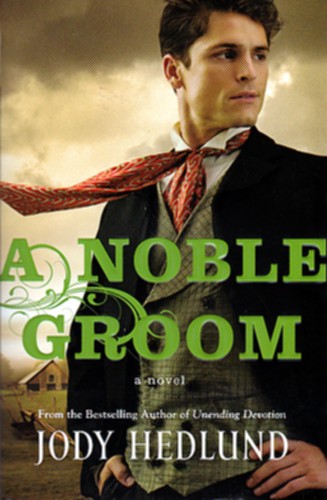 A Noble Groom ** by Jody Hedlund and published by Bethany Press.

Michigan, 1880. Annalisa Werner's hope for a fairy tale love is over. Her husband failed her in every way and now his death has left her with few options to save the family farm. She needs a plentiful harvest. That, and a husband to help bring it in. Someone strong, dependable. That'll be enough. A marriage for love... that's something she's given up on. So her father sends a letter to his brother in the Old Country, asking him to find Annalisa a groom. Then a man appears: Carl Richards, from their home country of Germany and a former schoolteacher--or so he says. He's looking for work and will serve on the farm until her husband arrives. With time running out, she accepts his help, but there's more to this man than he's admitting. He's also gentle, kind, charming--unlike any man she's ever known. But even as Carl is shining light into the darkness of her heart, she knows her true groom may arrive any day.

Pearl in the Sand

Love Amid the Ashes