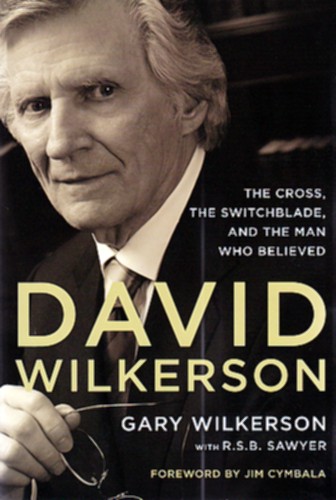 David Wilkerson: The Cross, The Switchblade and the Man who Believed by Gary Wilkerson and published by Zondervan.

The Cross and the Switchblade has sold over 16 million copies in 30 languages and was made into a movie starring Pat Boone. Christians will be enthusiastic about reading "the rest of the story" regarding Wilkerson's life and ministry.

When David Wilkerson moved to New York from rural Pennsylvania in 1958 to confront the gangs who ran the streets, he was a skinny, 120-pound man armed with only a cross and his faith. Using the Word of God and a bit of tough love, Wilkerson dedicated his life to helping some of the most dangerous men and women of the street escape the destructive spiral of drugs and violence and find new life in the Gospel.

The founder of Teen Challenge, a faith-based organization committed to weaning addicts off drugs, as well as the Times Square Church, now a non-denominational church of 8,000 members and still a safe place for those battling sins and addictions, Wilkerson was a hugely influential force for good in the city of New York.

Now readers can enjoy the rest of the story of Wilkerson's life and ministry, as told by his son Gary, in David Wilkerson: The Cross, the Switchblade, and the Man Who Believed. Readers will be inspired and strengthened in their faith as they read about a man who trusted God to provide in even the most dangerous of circumstances, who carried forward the vision God gave him without looking back, and who saw in the eyes of the drug addicts and gang members what others failed to see-Jesus Christ.

Heaven is for Real - A Little's Boy's Story