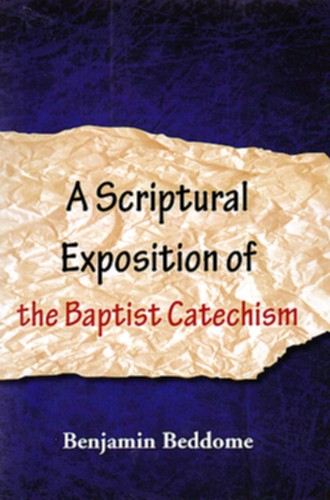 A Scriptural Exposition of the Baptist Catechism by Benjamin Beddome and published by Classics.

During the early years of his ministry Benjamin Beddome (1717-1795) used Benjamin Keach's 'The Baptist Catechism' extensively, but clearly felt that the questions and answers of this catechism needed to be supplemented by further material. So he composed what was printed in 1752 as 'A Scriptural Exposition of the Baptist Catechism by Way of Question and Answer,' which basically reproduced the wording and substance of the catechism drawn up by Keach, but added various sub-questions and answers to each of the main questions.

The Scriptural Exposition proved to be quite popular. There were two editions during Beddome's lifetime, the second of which was widely used at the Bristol Baptist Academy, which was the sole British Baptist seminary for much of the eighteenth century. In the nineteenth century it was reprinted once in the British Isles and twice in the United States, the last printing being in 1849.

Benjamin Beddome was born January 23, 1717, at Henley-in-Arden, Warwickshire, England. He was the son of Baptist minister John Beddome. He was apprenticed to a surgeon in Bristol, but moved to London in 1839 and joined the Baptist church in Prescott Street. At the call of his church, he devoted himself to the work of Christian ministry, and in 1740 began to preach at Bourton-on-the-Water, Gloucestershire. For many years he was one of the most respected Baptist ministers in western England. He was also a man of some literary culture. In 1752, he wrote "Exposition of the Baptist Catechism." In 1770, Beddome received a MA degree from Providence College, Rhode Island.

It was Beddome's practice to write a hymn weekly for use after his Sunday morning sermon. Though not originally intended for publication, he allowed 13 of these to appear in the Bristol Baptist Collection of Ash & Evans (1769), and 36 in Rippon's Selections (1787). In 1817, a posthumous collection of his hymns was published, containing 830 pieces.

A Shelter in the Time of Storm

Fruitfulness on the Frontline

Prayer: Awe and Intimacy With God

Side by Side, Walking with Others in Wisdom and Love

The Twenty Third Psalm for those who Grieve