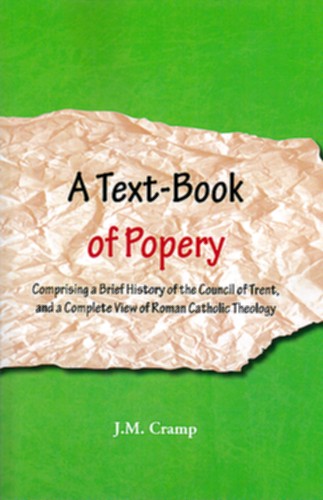 A Text Book of Popery by John M Cramp and published by Classics. This book comprises of a brief history of the Council of Trent and a complete view of Roman Catholic theology.

Protestants have no objections to meet their opponents on their own terms. The articles of faith of the Roman Catholic church are to be found in its accredited creeds, catechisms, formularies, and decrees. These received the finishing touch at the council of Trent. The doctrinal decisions of that assembly are held sacred by every Roman Catholic, in every country.

In compiling this small volume, the author has aimed to delineate the theological system of the Romish church, as definitively and authoritatively settled at Trent, and exhibited in the decrees of the council, its catechism, and the creed of Pope Pius IV. He has also endeavoured to render the work interesting to general readers by interweaving historical sketches, illustrative of the spirit and tendency of the sentiments maintained by Roman Catholics. The whole is intended to present a picture of Popery as it is fairly and faithfully drawn.

An Interview with C H Spurgeon - On Creation & Evolution