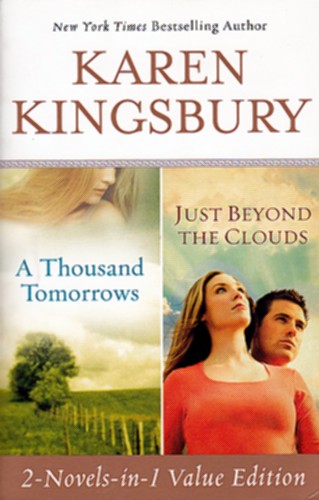 A Thousand Tomorrows / Just Beyond the Clouds ** by Karen Kingsbury and published by Center Street.

In A THOUSAND TOMORROWS, Cody Gunner, a talented but angry cowboy, meets Ali Daniels, a lovely and mysterious barrel-racer. The two are national champions, top of their game, alone and intent on staying that way. Cody has rejected everything about his past, and only has room for his little brother, Carl Joseph, born with Down Syndrome. Ali embraces life, making the most of every moment because of a secret she keeps hidden from the public, connecting her with a sister who died before she had a chance to live. Before their paths intersect, competing is all they need, but what fears must they face if together they ignite a love that burns brighter than both of them?

In JUST BEYOND THE CLOUDS, Cody is nursing a broken heart over the death of the love of his life, when he meets Elle Dalton, Carl Joseph's teacher. Cody can't bear the thought of losing his little brother, too, so when Elle begins championing Carl Joseph's independence, she finds herself at odds with Cody. But even while they battle it out, they can't deny the instinctive connection they share, and Cody faces a crisis of the heart. What if Elle is the one woman who can teach Cody that love is still possible?

In the brand-new omnibus edition, Karen Kingsbury's continuing story of devotion, tragedy, and renewal, comes to life, teaching that while love often causes the heart to break, it's also the only thing that can mend it again.

Even Now / Ever After (Two books in one)