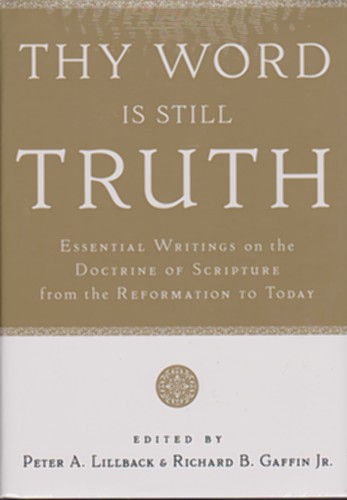 Thy Word Is Still Truth: Essential Writings on the Doctrine of Scripture from the Reformation to Today edited by Peter Lillback & Richard Gaffin and published by P & R Publishing.

This new collection of Reformed thinkers' writings from the Reformation to today brings together key documents on the inerrancy of Scripture in one readable volume. One of the hallmarks of Westminster Theological Seminary since its beginning in 1929 has been a high view of Scripture that reflects the historic Reformed theological and confessional tradition. Thy Word Is Still Truth confirms that Westminster still holds this high view. The book's title builds on the important influence of E. J. Young’s classic book on inerrancy, Thy Word Is Truth. This current anthology unapologetically borrows that title, emphasizing an abiding commitment to the entire truthfulness of the Holy Scriptures as well as a deep indebtedness to Reformed thinkers from the past to the present. In addition to including all the major confessions and catechisms, Thy Word Is Still Truth includes seminal articles on the doctrine of Scripture from the following authors:

My God is True!: Lessons Learned Along Cancer's Dark Road