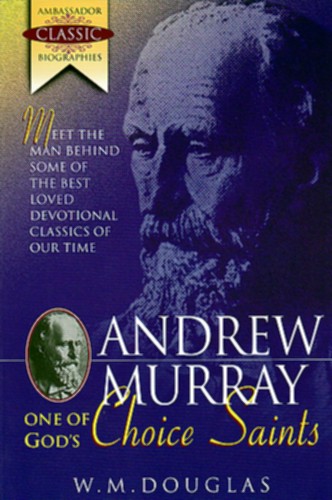 Andrew Murray: One of God's Choice Saints by W M Douglas and published by Ambassador Publications.

The aim of this book is to help the reader meet the man behind some of the bet devotional classics of our time. Born in South Africa, Andrew Murray was sent to study in Scotland and Holland. When he returned to South Africa as pastor and evangelist he led a revival which shook the country. Murray's lifetime of work to deepen the spiritual life of Christians has touched the church world-wide through the legacy of his writings which include: With Christ in the School of Prayer; Waiting on God and Abide in Christ.

An evangelical Christian of international stature he addressed Keswick and Northfield Conventions and founded Universities and Missions. Murray was the most influential leader of his own church in the nineteenth century and a mode of faithfulness for ours.