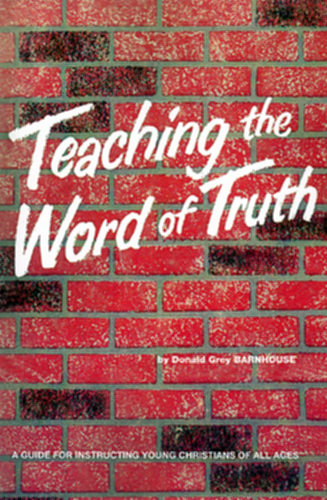 Teaching the Word of Truth: A Guide for Instruction Young Christians of All Ages by Donald Grey Barnhouse.

In 1927 Donald Grey Barnhouse became pastor of Tenth Presbyterian Church in Philadelphia. He discovered that traditional children's Sunday School methods were inadequate to teach the great doctrines of Scripture and purposed to design a course to meet that need. Stories were taken from Dr. Barnhouse's sermons, the doctrinal outlines simplified that he was using in Adult Bible classes, then arranged fora new course of study for the various departments of the Church's Children's Bible School. The work was illustrated for children by Mrs. Barnhouse. The final result was a four part systematic bible study course for children covering the fundamental doctrines of the Christian faith.

In subsequent years tens of thousands of copies were sold in the United States, and special editions published in Great Britain. It was translated into Arabic, Assamese, French, German, Greek, Japanese, Korean, Congo Swahili, and three languages of India: Hindi, Manipuri and Marathi.

Multitudes of young Christians (of any age!) have learned basic doctrine from these simple pages. Surely this illustrates the divine truth of 1 Corinthians 1:28, 29: "God chose what is low and despised in the world, even things that are not, to bring to nothing things that are, so that no human being might boast in the presence of God."

Thoughts to Make Your Heart Sing