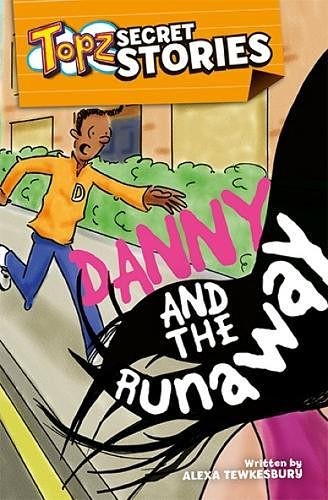 Danny and the Runaway - Topz Secret Diaries by Alexa Tewkesbury and published by CWR.

There’s lots of change in Holly Hill for members of the Topz and Dixons Gangs.

Denise is getting married and her daughter, Lily is very unhappy about it. She's afraid her new step-dad, Andy, will come between her and her mum, and that her mum won't want her any more. Rick’s dad left when he was only little so he befriends Lily and looks out for her.

Together, they unexpectedly meet another girl from an extended family who teaches Lily that it’s helpful to express her feelings through writing poems. When Lily tries to run away it’s through one of these poems that Denise comes to understand her daughter’s fears.

As a parallel story, Danny from Topz is going through the situation in reverse. His dad has lost his job and has had to take another one in Spain because it's all he can find. So, rather than gaining a new dad, Danny feels he is temporarily losing his own. He doesn't understand why God has allowed this to happen, but he knows that somewhere God will have a bigger plan than he can see. He, too, meets Lily and they share their reverse fortunes.

CD - Your Grace Finds Me