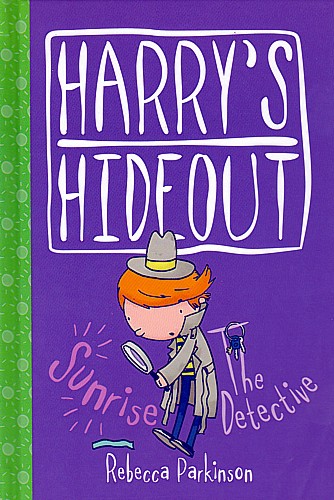 Harry's Hideout - Sunrise / The Detective by Rebecca Parkinson and published by CWR.

Harry loves the Hideout that he built with his Grandad. In it he keeps the very special book that Grandad gave him to help him to learn about the Person who made the whole world. But it’s not just any book – it’s a portal to Bible times.

Harry enjoys a special treat in Sunrise! when he and his Dad climb a mountain while it’s still dark. Huddled together against the cold, they talk about the stars then Harry watches in amazement as the sun rises and the sky is filled with light. Later in the day, when his special book takes him to Bible times, he sees Jesus, after a long and tiring day, go out into the mountains to talk to His Father. Realising how special it is to spend time talking to someone who cares about you, he starts to understand the meaning of prayer.

In The Detective, Harry solves the problem of the missing keys, but only after his special book takes him to hear Jesus telling a large crowd about lost sheep and lost coins. It’s only when he returns home and the keys are found that Harry realises what Jesus’ stories meant – God searches for lost people in the same way that Harry and his Mum searched endlessly for her lost keys.

David Livingstone - Who is the Bravest? (Little Lights)

Amy Carmichael - Can Brown Eyes be Made Blue ? (Little Lights)