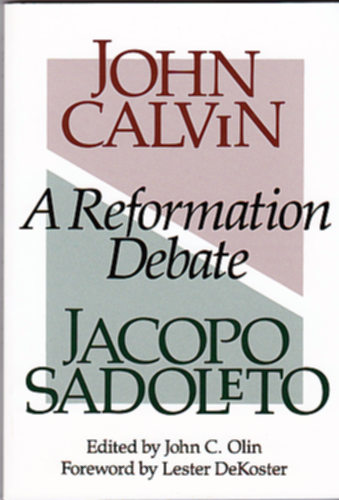 A Reformation Debate by John Calvin and Jacopo Sadoleto and published by Baker Books.

In 1539 Cardinal Jacopo Sadoleto, Bishop of Carpentras, France, sent a letter to the magistrates and citizens of Geneva asking them to return to the Catholic faith. A few months later, John Calvin replied to Sadoleto, defending the Protestant reforms.

Both letters are lucid and eloquent statements of their espective positions. Their dialog is polemical, but their tone is elevated and their arguments substantial. The letters of Calvin and Sadoleto comprise one of the most interesting exchanges of Catholic-Protestant views of the Reformation era. Together, they form an excellent introduction to the great religious controversy of the sixteenth century.

The two documents are not "ivory tower" writings. They were drafted amid the religious controversy then dividing Europe. They reflect the temperaments and personal histories of the men who wrote them. Sadoleto's letter is irenic, emphasizing unity and peace of the church. Calvin's response is in part a personal defense that records his own religious experience. And its taut, comprehensive arguments are characteristic of the disciplined and logical mind of the author.

How to Read Exodus

Are Miraculous Gifts for Today