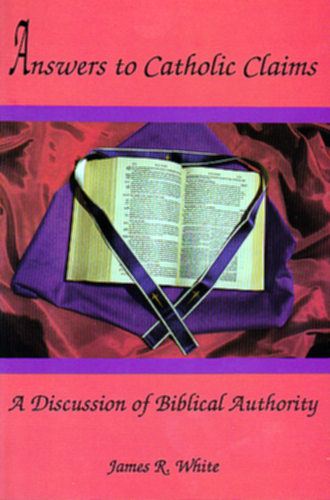 Answers to Catholic Claims: A Discussion of Biblical Authority by James R White and published by Crowne Publications Inc.

Answers to Catholic Claims deals with the vital issue of Biblical Authority. The Reformer's doctrine of Sola Scriptura, is examined and shown to flow naturally and necessarily from the teaching of the Bible itself. Sola Scriptura, the doctrine that the Bible alone is the sufficient and authoritative rule of faith for the Church, is a Biblical doctrine, rooted firmly in the words of the prophets, the Apostles and the Lord Jesus Christ Himself.

The Roman Catholic concept of "Tradition" is examined and found to be in conflict with the Word of God, and examples of the errors that arise when Sola Scriptura is rejected are presented.

This work is important for those who wish to present the Gospel to Roman Catholics but who struggle with Catholic claims of authority.