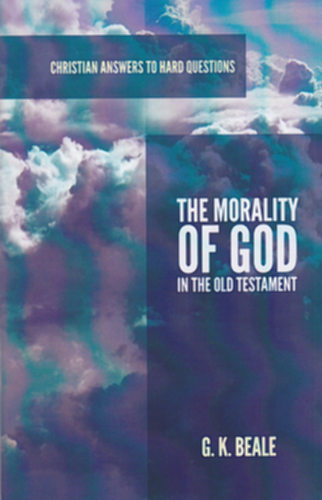 Morality of God in the Old Testament - CAHQ: Christian Answers to Hard Questions by Gregory K Beale and published by P & R Publishing.

The purpose of this booklet is to discuss the problem of how God can be considered to be morally good, while at the same time he does things and commands people in the Old Testament to do things that do not appear to be good. One famous example is God’s command to Israel to exterminate every man, woman, and child of the Canaanites (e.g., cf. Deut. 20:12–15 with 20:16–18).

Some believe that such a God cannot be good, since this directive of God’s is virtually equivalent to his commanding Israel to commit an act of ethnic cleansing, which would not be worthy of the loving and gracious God of the Bible. Though several kinds of problems pertaining to God’s morality in the Old Testament could be discussed, this booklet will deal primarily with the particular problem concerning the killing of the Canaanites and, secondarily, the imprecations (or cursings) in the Psalms, since these pose perhaps the greatest potential challenges to the morality of God. Some of the principles that we ind standing behind these two major issues also underlie an approach to some of the other moral problems. Thus, the issue of the Canaanites and that of the imprecations in the Psalms will serve as examples of how to approach other similar kinds of problems in the Old Testament.

Trellis and the Vine

God's Care for the Widow

Abortion - Open your Mouth for the Dumb