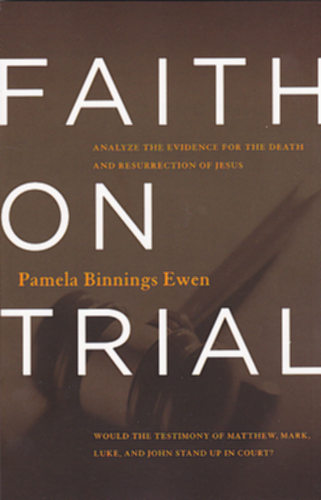 Faith on Trial: Would the Testimonies of Matthew, Mark, Luke, and John Stand Up in Court? by Pamela Binnings Ewen and published by B & H Publishing Group.

It is the cornerstone of Christianity: the belief that Christ was the Son of God who died on the cross for the salvation of lost souls. But how would the miraculous story of Christ stand up in a real court of law? Former attorney Pamela Binnings Ewen answers that startling question in Faith on Trial, using the Federal Rules of Evidence to investigate the life and death of Jesus.

Was he truly a divine miracle-worker, or was he just an ordinary man with misguided notions? Faith on Trial goes beyond hearsay and myth to the truth of this two-thousand year old question. Holding bedrock Christian beliefs up to detailed examination-including reviews of historic, scientific, and manuscript evidence--Ewen carefully and methodically considers the credibility of the gospel writers and their testimonies. Her look at new evidence is sure to bring the question of Christ's divinity to a new level.

This new, updated version of Faith on Trial includes a user's guide to help reader's better understand and use the trial process that Ewen applies in this book to find and explain answers to difficult questions of faith.