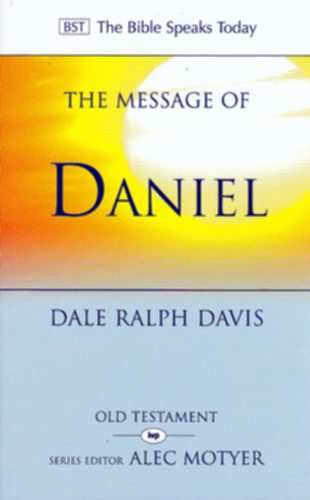 The Message of Daniel - BST: His Kingdom Cannot Fail by Dale Ralph Davis and published by IVP.

God had allowed the unthinkable to happen. His people were in exile in Babylon; his promises seemed shattered. Was he really in control? Was he faithful? Did he still care? One young man, Daniel, affirmed that he did, although it was not without struggle, and it cost him to do so.

The Old Testament book of Daniel contains well-known stories: Daniel in the den of lions, his three companions in a fiery furnace, and the strange handwriting on the wall at Belshazzar's feast, which struck terror in the heart of the Babylonian king. However, the book can be difficult to understand. Along with stories about Judean exiles working in the court of pagan kings (chapters 1-6), it also consists of Daniel's enigmatic visions and prophecies about the future (chapters 7-12). It is written in two languages, Hebrew and Aramaic, and the language division does not match the subject division.

Ralph Davis explores the book's background, discusses significant interpretative issues and problems, and offers a lively exposition of Daniel's message, which may be summed up in the words of Jesus: 'the end is not yet ... but the one who endures to the end will be saved' (Mark 13:7, 13). The book is essentially 'a realistic survival manual for the saints', still vitally relevant for the church in today's world.

God who is There