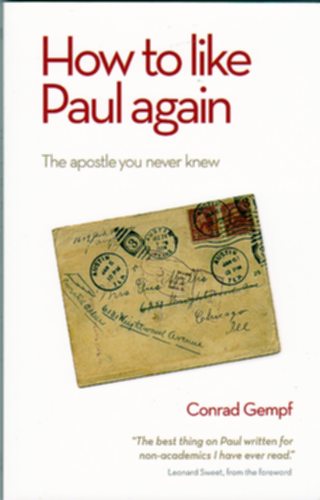 How To Like Paul Again: The Apostle You Never Knew by Conrad Gempf and published by Authentic Media.

You know you're supposed to like him, but you just don't. Maybe it's the authoritarianism, maybe it's the arrogance, maybe it's the views he seems to hold, maybe it's the way that he drones on and on until you're falling asleep. Well ... you're not the only one. None of that is new. Not even the last bit (see Acts 20:9).

But there's a secret to liking an initially unlikeable person like Paul: walk a mile in his moccasins. Or three. This small book aims to take you inside three controversies that Paul faced. Would you have advised him to do anything differently? Would you have done as well as he did? This is a quick and entertaining introduction to the letters of Paul, from which you'll also learn about yourself.

I Wish Jesus Hadn't Said That