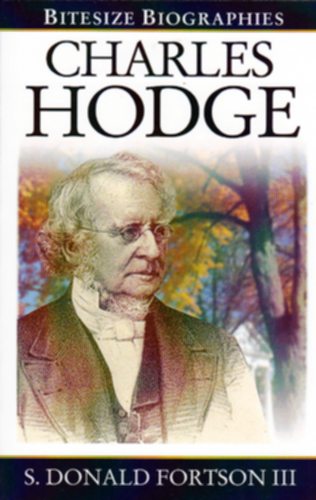 In 1872 Professor Charles Hodge celebrated fifty years of teaching at Princeton Seminary in New Jersey. For a half century, Dr Hodge had trained almost three thousand ministers, missionaries, and professors who had carried the gospel message throughout the United States and many parts of the globe. During this period Princeton had been the premier seminary in the country, and no other teacher in America had come even close to instructing this many ministers during his career. Hodge shaped not only Presbyterianism and evangelical Christianity in his generation but would have a lasting impact upon generations of clergy in America who devoured his writings and found in them a source of great intellectual and spiritual nourishment.

Hodge lived during an era of great crisis in the United States. Living for most of the nineteenth century, he would witness the abolition tumult of ante-bellum America, the bloody War Between the States, and the ongoing struggle of Reconstruction. His own Presbyterian Church would experience its greatest division during his lifetime. In the midst of these national and ecclesiastical calamities, the pen of Charles Hodge was active, constantly seeking to build bridges between adversaries. Though a peacemaker by demeanor, he understood that there was also a time to take a stand. And stand he did against the early waves of liberal theology that invaded America in the nineteenth century. Widely hailed as a defender of truth, Hodge battled a rising tide that was beginning to erode the sacred shorelines of historic Christianity.