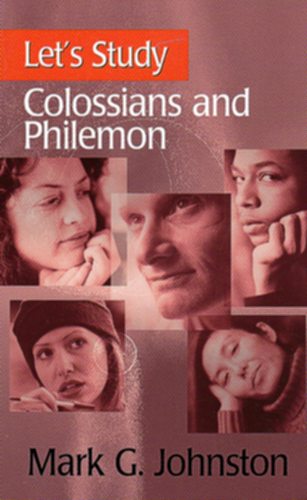 All too often Christians and churches are shaped by the latest ideas about Christianity instead of the timeless truths of the Bible which form its true foundation. Although what has become known as the 'Colossian problem' was tied to a particular place and time, the issues bound up with it have surfaced again and again throughout the ages - thus what was happening in Colossae in 60 A.D. has a lot to say to us in the twenty-first century.

Paul's little letter to Philemon is intimately connected to Colossians, and is one of those often-overlooked gems of the Bible. The respective messages of these two letters are closely related, and some of what Paul had broadly set out to the Colossians is developed in detail in his letter to Philemon, who was a member of that church. Let's Study Colossians and Philemon will help readers to see the horizons of both letters as extending to the church of all ages. Paul shows us that the acid test of the spiritual health of a church is whether or not Christ is at its heart - not just in some vague and general sense, but Christ in all his glory as he is set before us in God's Word.