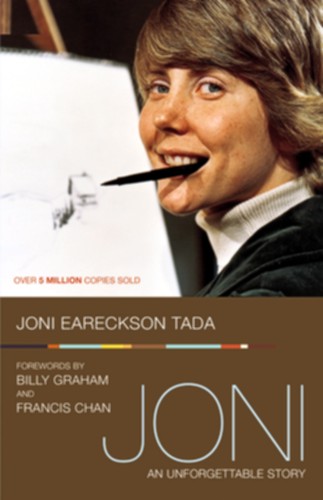 The award-winning story of a young woman who triumphed over devastating odds to touch countless lives the world over with the healing message of Christ. Includes photos and illustrations by Joni. In a split second on a hot July afternoon, a diving accident transformed the life of Joni Eareckson Tada forever. She went from being an active young woman to facing every day in a wheelchair. In this unforgettable autobiography, Joni reveals each step of her struggle to accept her disability and discover the meaning of her life. The hard-earned truths she discovers and the special ways God reveals his love are testimonies to faith’s triumph over hardship and suffering.

This 25th Anniversary edition of this award-winning story--which has more than 3,000,000 copies in print in over 40 languages--will introduce a new generation of readers to the incredible greatness of God’s power and mercy at work in those who fully give their hearts and lives to him. Joni has written an afterword in which she describes the events that have occurred in her life since the book’s publication in 1976, including her marriage to Ken Tada and the expansion of her worldwide ministry to families affected by disability. Joni is now available for the first time in an unabridged audio version read by the author.

A Foot in Two Worlds

Know and Tell the Gospel

Making the Most of the Rest of Your Life