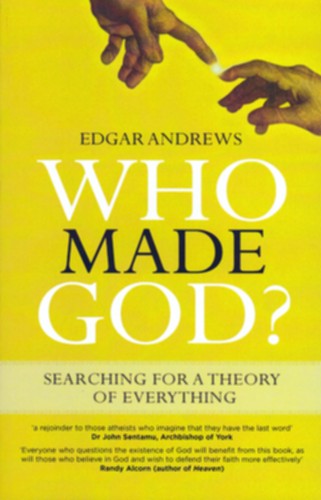 Who Made God? Searching for a Theory of Everything, Paperback Edition by Edgar Andrews and published by Evangelical Press.

A book written by a distinguished scientist about the existence of God, which has chapter headings like 'Sooty and the universe', 'Steam engine to the stars' and 'The tidy pachyderm', has to be different. It is. Addressing profound questions of science, philosophy and faith with an amazing lightness of touch, Edgar Andrews exposes the pretensions of the 'new atheism' of Richard Dawkins and others, blending incisive arguments with gentle humour. As Fay Weldon writes, the result is 'Thoughtful, readable, witty, wise.'

However, the author's aim is not simply to raise a standard against the aggressive atheism of our age but to provide a logically consistent and altogether more satisfying alternative. He describes how his fellow physicists dream of discovering a 'theory of everything' that will embrace every physical process and phenomenon in the cosmos. But he points out that there is more to existence than the material world - the things that make life worth living are mainly non-material.

Can there, then, be a theory of everything that includes not only space, time, matter and energy but also the realms of the heart, mind, conscience and spirit? Yes, indeed, as this book shows. It is the hypothesis of God, a 'theory' that, in spite of its opponents, still towers above the barren landscape of atheism and despair.

A Young Woman After God's Own Heart