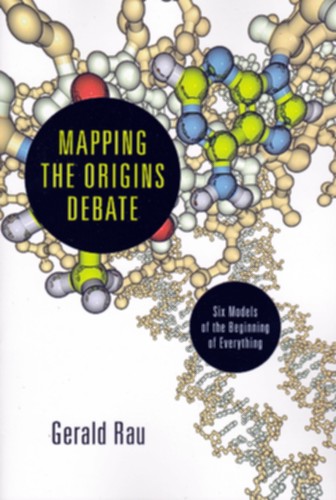 Mapping the Origins Debate: Six Models of Beginning of Everything by Gerald Rau and published by IVP Books.

Gerald Rau offers a fair-minded overview of the six predominant models used to explain the origins of the universe, of life, of species and of humans. He aims to show the contours of current debates both among Christians and between Christians and non-theists. He also enables us to evaluate and think more clearly about the various arguments for each position. He accomplishes this by not only describing the options on origins, but by exploring the philosophical assumptions behind each and how evidence is counted corresponding with each model.

While surveying the various models, Rau does not avoid in-depth consideration of the complexities involved in what makes up a given model and how they differ. Rau investigates the nature of science and the differing philosophies of science operating in the debates. He goes on to show the importance of philosophical assumptions involved in each model and the key role among Christians of the assumed proper hermeneutic for interpreting Scripture. Rau cogently identifies the role those assumptions play in determining what counts as significant evidence in the current debates. He presents in detail how the scientific evidence is interpreted by each model to substantiate its conclusions. He also notes the limits of a scientifically gained knowledge. In the end, he shows not just what the differences are among the options but why they disagree and why we shouldn't expect any resolution as long as the philosophical assumptions remain fixed. Any reader will not only become better informed about the current debates on origins but will become better thinkers about the issues at stake.

Truth About Man - A Biblical Study of the Doctrine of Man