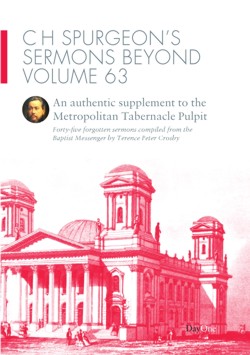 Here are 45 sermons which were awaiting publication in the Metropolitan Tabernacle Pulpit when it came to an abrupt end in 1917.

The 63 volumes and 3563 sermons of Spurgeon’s New Park Street and Metropolitan Tabernacle Pulpits were a remarkable achievement, and it was only on account of the shortage of paper and metal caused by the First World War that publication ceased on 10th May 1917.

Many hundreds of sermons were ready and waiting for their weekly publication and notices in the last two sermons indicated that it was the intention to resume publication once peace had been restored. However, only twenty hitherto unpublished sermons were to appear in 1922 in a volume entitled ‘Able to the uttermost’.

It is the purpose of this volume to bring to light the sermons which probably would have appeared in te remainder of Volume 63 and at the start of volume 64 of the Metropolitan Tabernacle Pulpit, sermons which originally appeared only in magazine format from 1877 to 1881.

Shadow of Christ in the Law of Moses

Bread of Heaven - The Life and Work of Williams Pantycelyn

Our Great God and Saviour