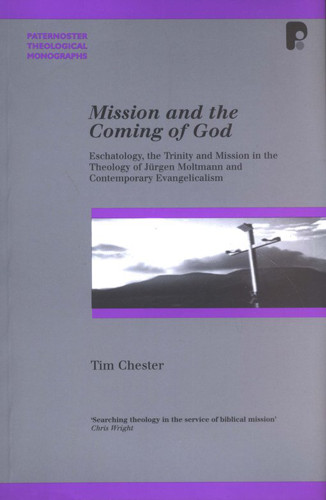 Mission and the Coming of God: Eschatology, the Trinity and Mission in the Theology of Jurgen Moltmann by Tim Chester and published by Paternoster.

How does the eschatological future impinge on the present? Is the kingdom of God present outside the confession of Christ in movements towards social justice? Is Christian hope a stimulus to social involvement or an alternative? And how does the present impinge on the eschatological future? What is the relationship between our actions now and the new creation? Is there eschatological continuity between the two? Jurgen Moltmann, one of our most influential contemporary theologians, has had much to say both on eschatology and its relationship to mission. This book explores his thought along with evangelical responses to it.

Eschatology has been central to evangelical debates about social involvement ever since the Laussanne Congress in 1974. The book examines how evangelicals themselves have related hope and mission. The book highlights the important contribution Moltmann has made while offering a critique of his thought from an evangelical perspective. In so doing, it touches on pertinent issues for evangelical missiology. The conclusion takes John Calvin as a starting point, proposing 'an eschatology of the cross' which offers a critique of the over-realized eschatologies in liberation theology and triumphalistic forms of evangelicalism.

Evidence for God: 7 Reasons to Believe the Existence of God

Our Perfect God - A Summary of the Attributes of God