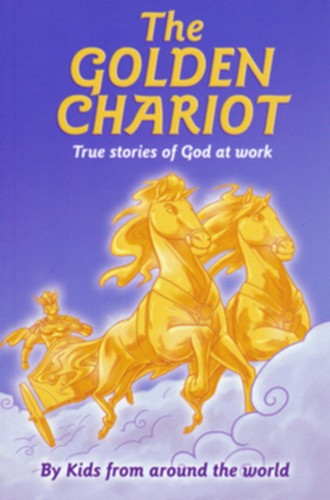 The Golden Chariot, True Stories of God at Work by Kids from around the World edited by Jen Kallmier and published by Christian Focus Publications.

'I remember hearing yells of 'RAT!!' and then several piercing screams that would have put a girl to shame. I will admit I leapt up onto the bed near me, joining the three other guys already there! ...'

'Sometimes living in Asia can be hard. Especially when God tells my mum and dad what He wants them to do and I don't want to do it. So I asked God for something to prove to me we should move ...'

'Within seconds there were about 100 young people, some armed with iron bars. Our car was surrounded. Rocks were bouncing off the car like hail. The windscreen was hit a number of times and it was almost impossible to see out of ...'

'For the first time in my young life, I had to take the lead. It was a life or death situation. I was eight years old ...'

'When Jesus laid his hands on people they got better. Could we lay hands on our fridge and pray for it?', the kids asked Mum ...

This book will give you a 'kids-eye' perspective of life in missions. It has exciting, true stories, written by modern-day children whose parents are part of an international mission that is now 100 years old - WEC. Some were present during major events in world history, some risked their lives on crocodile-infested rivers, others just needed a friend. The stories will reveal their hearts to you.

Yours is the Kingdom