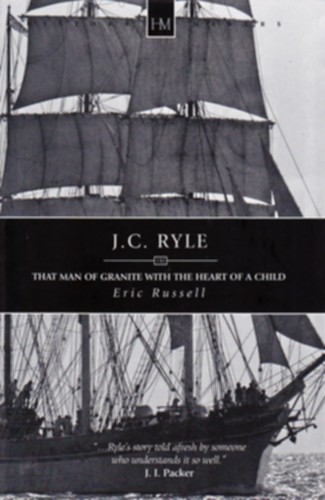 J C Ryle: That Man of Granite with the Heart of a Child, History Makers Series by Eric Russell and published by Christian Focus Publications.

Superb story of a spiritual leader with a gentle heart! John Charles Ryle was born into a comfortable English family background - his father was a politician and businessman. Ryle was intelligent, a great sportsman (captain of cricket at Eton and Oxford) and was set for a career in his father's business, and then politics - a typical, well to do, 19th century family.

Then - disaster. The family awoke to find that their father's bank had failed, taking all the other businesses with it. Ryle had lost his job and his place in society. He resigned his commission in the local yeomanry and went to comfort his parents, brother and sisters. One moment a popular man with good prospects, the next the son of a bankrupt with no trade or profession. Almost as a last resort, he was ordained into the ministry of the church.

Ryle's reputation as a pastor and leader grew until he was appointed the first Bishop of Liverpool, a post he held for 20 years. He was an author who is still in print today (he put aside royalties to pay his father's debts) and a man once described by his successor as ‘that man of granite with the heart of a child.' He changed the face of the English church.

Ryle stands as a colossus at the junction of two centuries - a hundred years after his death he still stands as an example to church leaders today of how to combine leadership, a firm faith and compassion.

Commentary on Jewish Roots of Romans

Importance on Being Ernest