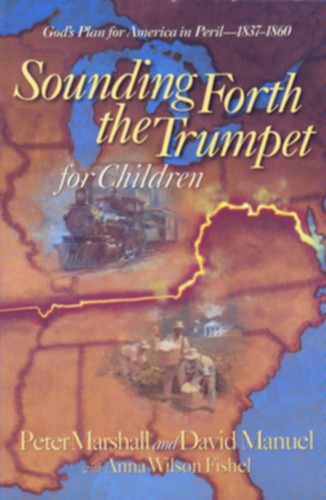 Sounding Forth the Trumpet for Children; God's Plan of America in Peril - 1837 - 1860 by Peter Marshall & David Manuel and published by Revell.

For slaves sweating in the cotton fields, the pull of freedom was strong. They ran away for many reasons: harsh treatment, brutal whippings, fear of losing their families, being sold. Escaping was not the hard part - there were no stone walls or barbed wire holding them on the plantations. Yet many blacks stayed, because not getting recaptured was hard....How could the runaways avoid the slave catchers and tracking dogs and make it hundreds of miles north?

During the 1840s and 50s, a growing group of men and women whites and free blacks, hid runaways in their homes, feeding them, clothing them, and passing them along to other slave houses. Many of them believed they had been called by God to do this. Risking their reputations, their freedom, and even their lives, they faced stiff fines and possibly prison if they got caught. Their homes were depots on what became known as the "Underground Railroad."