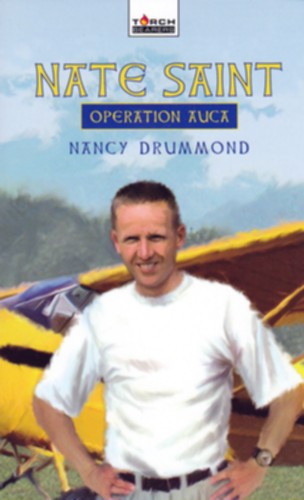 Nate Saint peered eagerly over the edge of his big brother Sam's Challenger biplane. His heart thumped against his ribs in anticipation of takeoff. "You ready for this?" Sam asked. Nate nodded enthusiastically. "Well then, off we go!" Strapped securely in place in the open cockpit Nate grinned, and Sam grinned back. Then the engine sputtered and roared to life. They were on their way. It was Nate's first flight but it would be one of many that would eventually take him thousands of miles into the jungles of Ecuador. From the base of Shell Mera Nate would take part in countless operations to help missionaries spread God's word. From his vantage point in the skies Nate would scour the jungle floor in order to find the elusive Auca tribe who had never heard the truth of God's word.

On January 8, 1956, Nate and some other missionaries flew to an area near an Auca village and landed at strip of sand that they had named Palm Beach. This was Nate's final flight for he and four other missionaries on the plane that day were martyred when tribesmen attacked with spears a few days later. Although this was Nate's last flight - it wasn't the end of his work. What he and the other martyred missionaries had done for the Kingdom of God convicted many to listen to God's call to mission. And the work of evangelism continued to the Aucas too. Many in that village came to accept Christ including several of the men who had thrown their spears on that terrible day.