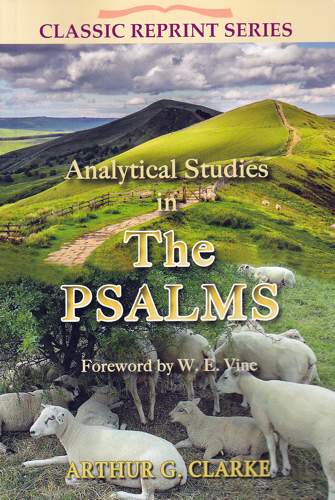 Analytical Studies in the Psalms by Arthur G Clarke, with Foreword by W E Vine and published by Ritchie Christian Media.

No other book the Old Testament touches the daily life of the Christian more closely as the Psalms.

There are many precious references to the suffering and the glory of the Lord Jesus Christ. On the first day of Japan's entry into World War II, Arthur Clarke was arrested in North China where he was privileged to serve God for serve for many years as a missionary.

He was placed in solitary confinement for three months. The daily strength and comfort derived from the Scriptures, especially the Psalms, during these difficult days helped him immensely. Many hours were profitably occupied in making an analytical study of the Book of Psalms. Notes were written on any scraps of paper available. When Arthur was finally released in 1945, these notes were expanded and revised. It is hoped that this book will continue to bring much comfort and encouragement to believers.

Analysis of Gospel of Mark **