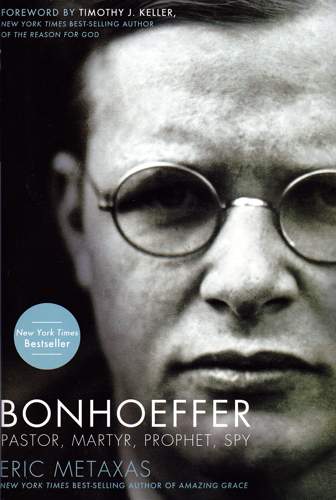 As Adolf Hitler and the Nazi's seduced a nation, bullied a continent, and attempted the extermination of European Jews, a small number of dissidents and saboteurs worked to dismantle the Third Reich from the inside. One of these was pastor and theologian Dietrich Bonhoeffer.

Widely known as the author of the classic works, The Cost of Discipleship, Life Together and, arguably, some of the most important theological works of the 20th century including Act & Being, Sanctorum Communio and Ethics. Bonhoeffer is also widely known for his 1945 execution in Flossenberg concentration camp for attempting to assassinate Hitler.

Bonhoeffer: Pastor, Martyr, Prophet, Spy is the first fully comprehensive biography of Bonhoeffer in more than 40 years. Written by best-selling NY Times author Eric Metaxes, he presents both sides of Bonhoeffer's life, as theologian and as conspirator drawing them together to tell a searing story of incredible moral courage in the face of monstrous evil.

Presenting a deeply moving narrative, using previously unavailable documents-including personal letters, detailed journal entries, and first-hand personal accounts, Metaxas reveals dimensions of Bonhoeffer's life and theology never before seen. Furthermore, Metaxas presents the fullest accounting of Bonhoeffer's heart-wrenching 1939 decision to leave the safety of America for the lion's den of Hitler's Germany, and using extended excerpts from love letters and coded messages written to and from Bonhoeffer's Cell 92, we are allowed to see for the first time the full story of Bonhoeffer's passionate and tragic romance.

Finally, Bonhoeffer gives witness to the extraordinary faith of an incredible human being, while also illuminating the tortured fate of a nation he sought to deliver from the evil tyranny of National Socialism, and its political party, the Nazi party. The reader will come face to face with a man determined to do the will of God radically, courageously, and even to the point of death.

Jesus: The Only Way to God-Must You Hear the Gospel to Be Saved?

Let the Nations Be Glad