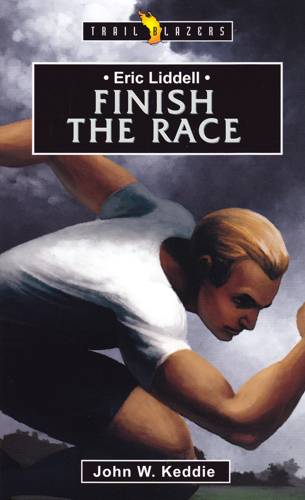 As a young child Eric Liddell lived in the exotic climate of China. His parents worked there as missionaries, teaching the good news of Jesus. Eric's life from then on brought him to boarding school in England, university in Edinburgh and the fame of Olympic Stardom in Paris. But with that fame came trouble as he struggled to stand up for his Christian faith. Eric's strong belief in keeping the Lord's Day as a day of worship was challenged when his 100 metres race was scheduled for the Sunday. Eric's strength of conviction and his subsequent win in the 400 metres have made him a hero and a role model for many young men and women.

But his life was so much more than winning tapes and starters' orders - his whole life was a race for God. This race took him back to the country of his birth - China. This country became the country of his death in a Prisoner of War camp. The man who became known affectionately as the 'Flying Scotsman' in the end lived and died in China - thousands of miles from his native land and his athletic conquests.

Voices from the Past - Puritan Devotional Readings

Corrie Ten Boom - Are All the Watches Safe ? (Little Lights)