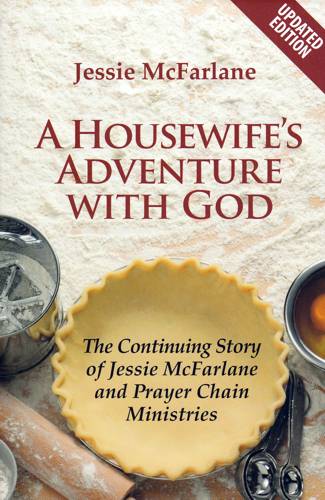 Jessie McFarlane wanted to have a deeper, more real Christian life - "teach me to pray" she begged God continually. She had been inspired by hearing Donald Coggan (1909-2000) say at his enthronement as Archbishop of Canterbury, that "whether you're a housewife baking a cake or being crowned as archbishop, it is all for the glory of God". Her relationship with God grew stronger and she began meeting with her sister and a friend as a prayer triplet. There was plenty to pray about in 1981 and soon she was organising a 24 hour round the clock prayer meeting for a Luis Palau mission in Glasgow. Afterwards the three women continued to pray together; it was the time of the Yorkshire Ripper murders, Belfast was erupting in violence after the death of Bobby Sands, coal miners were striking, unemployment reached 2.5 million in the UK.

When they learned that Evelyn Christenson was coming to England they organised a meeting for Evelyn to speak to women interested in prayer. 650 women came and of them 450 agreed to become part of a new a movement, a prayer chain for the nation. This has now developed into an international movement called "Prayer Chain Ministries."

After the inaugural National Prayer Breakfast in 1984 the ministry has taken on an extra direction as the organisation has gained access to people in government and business. You cannot fail to be inspired and encouraged by this story of dedicated prayer, or to be challenged to make a difference for God in your surroundings and experience and to do all for the glory of God.

90 Days with the Christian Classics

Only A Prayer Meeting

CD - Brooklyn Tabernacle Choir Live - This Is Your House (2 cds)