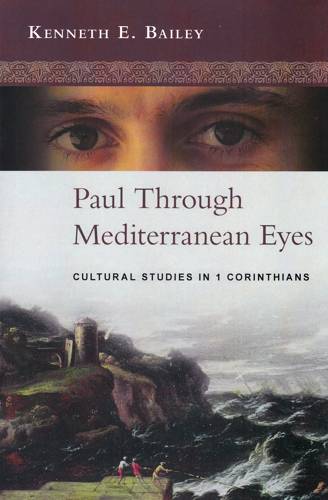 Paul was a Hebrew of the Hebrews, steeped in the learning of his people. But he was also a Roman citizen who widely traveled the Mediterranean basin, and was very knowledgeable of the dominant Greek and Roman culture of his day. These two mighty rivers of influence converge in Paul's first letter to the Corinthians.

With razor-sharp exegetical attention to the text, Kenneth Bailey's Paul Through mediterranean Eyes examines the cultural milieu/setting and rhetorical strategies that shaped this pivotal and complex epistle. The first letter to the the Corinthians, as Bailey notes, is a corrective epistle for the Corinthian church and in so doing so argues that the epistle is deeply rooted in the Hebraic prophetic tradition and draws heavily from the Old Testament prophetic tradition. In doing so, Bailey shows just how extensively Paul linked his thinking with the great prophets of Israel's history.

Throughout, Bailey employs his expert knowledge of Near Eastern and Mediterranean culture to deliver to readers a new understanding of Paul and his world. Familiar passages take on a new hue as they are stripped of meaning established outside of historical context and rendered back into their ancient setting.