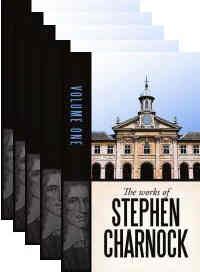 There were theological and spiritual giants in the earth in the days of the English Puritans, and Stephen Charnock (1628-80) was prominent among them. His Works present a feast of rich teaching and exposition, characterized throughout by sound theology, profound thought, and an imaginative style. The five volumes now reprinted from the classic nineteenth-century Nichol edition contain a total of more than 2,800 pages and 64 distinct discourses or sermons. Of these, only one was published during the author's lifetime, all the rest being edited from his manuscripts and published by his friends, Richard Adams and Edward Veal, after Charnock's death in 1680.

While expounding timeless truth, Charnock's discourses are strikingly relevant to contemporary discussions. Then, as now, there were many willing to declare their atheism publicly, who would "not only say it in their hearts, but publish it with their lips, and boast that they have shaken off those shackles which bind other men's consciences". However, "every atheist is a grand fool. If he were not a fool he would not imagine a thing so contrary to...the rational dictates of his own soul, and contrary to the testimony of every creature and link in the chain of creation."

Defense of the Faith

The Works of Jonathan Edwards (2 vols)